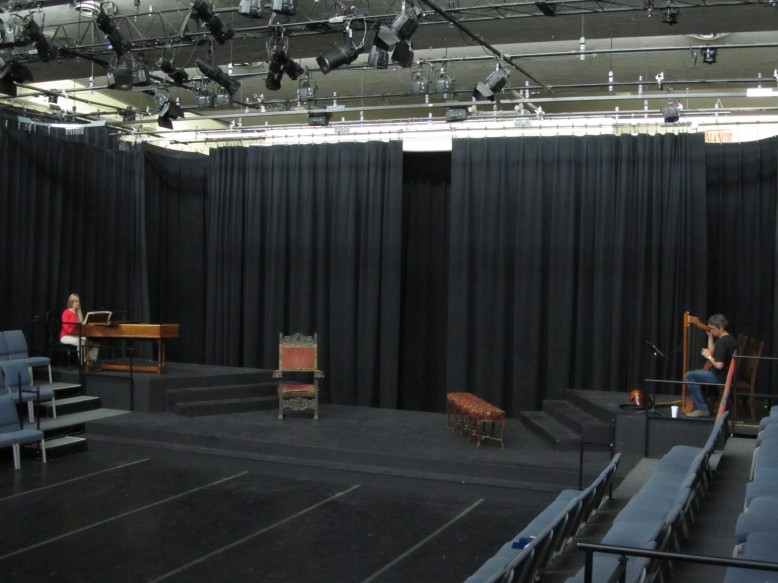 The Winter’s Tale is set in two different worlds. The Sicilian part of the play is courtly and structured. The Bohemian part is freeform, pastoral and pagan.

To emphasize this difference, Meier split the musical direction in two. Dawn Sellers will design the Sicilian portion, using harpsichord. Paul Amiel will employ harps and flutes for Bohemia.

Amiel is a full time teacher at the University of Arizona’s Center for English as a Second Language. Though he has a strong passion for music, he hasn’t made it his profession. Having it as just a hobby gives him some flexibility to explore and experiment. Currently, he’s learning to play the accordion.

“I’m mainly interested in instruments that have a bigger meaning or purpose than entertaining. Music that functions as something other than making you tap your foot,” Amiel said.

Next, he’ll study the script again, picking out places that need music. Some are obvious; when Shakespeare calls for a song. Some are technical; long set changes or transitions. Some are artistic; Meier wants a monologue by Time to be sung.

Amiel says that the requirements form “a mental grid that you poor into your head and then you just wait for some inspiration.”

Flexibility is a key factor for theatre musicians. “I get to be a co-creator,” Amiel said. “Just the same way that actors don’t say the lines the same way every night, I get to play it differently every night. We start to listen to each other and we start to have a relationship.”

Though Amiel spends entire performances on stage in the face of the audience, afterwards, they rarely recognize him. For him, success is when he’s not noticeable. “It’s like oxygen. You don’t think about it when you’re breathing but if it were gone it’d be a problem. I want the music to be like that.”

Dawn Sellers first met Cynthia Meier when she was writing a play. Meier discovered that Sellers had an extensive musical background that began when she was a young child playing for her church. Sellers has been working with the Rogue for three years.

“I love images with music. I love words and the combination of using those together is like my dream situation. I love the fact that they use acoustic music all the way through.” Sellers said.

For Sellers, the first step is so sit down with the director to learn about her concept of the play. Sometimes she gets a description of a feeling, sometimes an image, sometimes a particular sound. Sellers works off that and comes back to present the director with ideas to choose from.

I sit down with the director and ask her what her concept of the piece is, of the play. She’ll give me general comments of the feel or some kind of image or a particular kind of sound bu nothing really specific . then I’ll come back and present some ideas and she choses from them. So that’s always the key. Kinf od unserdatning what they want with what they say and bringing something that fits the mood and character off the piece.

“The key is understanding what they want with what they say,” Sellers said. “It’s bringing something that fits the mood and character of the piece.”