After years at the top of the nation’s list for car thefts, Arizona has dropped down.

Listen to the story and read more here at Arizona Public Media.

The University of Arizona Medical Center will introduce this summer a new residency program in ear, nose and throat medicine.

The five-year Otolaryngology – Head and Neck Surgery Residency Program will begin July 1 and will be the second otolaryngology training program in Arizona.

This Saturday I participated in a Radio Boot Camp class. Led by journalists from Arizona Public Media the 12 hour crash course taught us the basics of how to write, record, voice and edit an audio story. This is the product of that experience.

Though many Tucsonans aren’t aware, Tucson has one of the largest populations of resettled refugees in the United States. Nearly 62,000 refugees have relocated to Tucson in the last 10 years.

This map shows the the 8 countries where most of Arizona’s refugees are from. 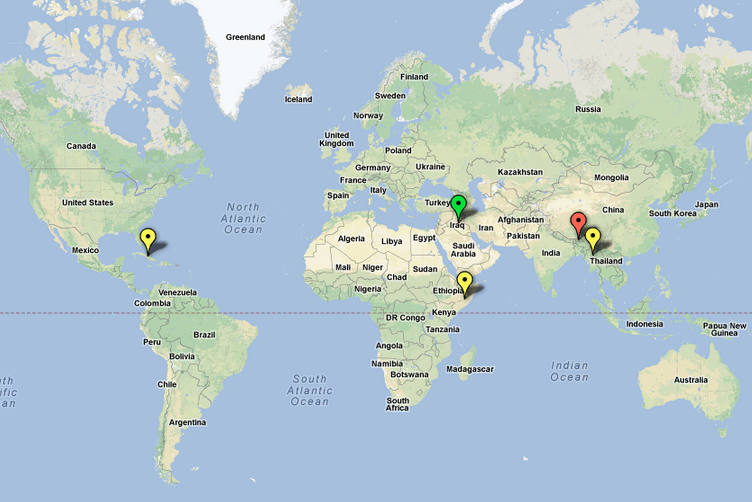 Click here to take a closer look at the map.

Though they face many obstacles when adjusting to life in a new country, many refugees have said that one of the hardest things to deal with in their move was the language barrier. The issue, however, is more complex than simply not being able to speak English.

Abdullahi Omar is a refugee from Somali. Though he knew English when his family moved to the United States, he still says there were colloquialisms and other aspects of the language that he didn’t understand.

Bushra is a refugee from Iraq. Though she did live in other countries such as Jordan before moving to the United States, the resettling was still a challenge. She said its important for refugees to go out into the community to learn the language. One of the reasons she thinks its easier for young people to learn English is because they have to go to school, they have to spend time immersed in the language. However, that doesn’t come without it’s problems. Here she talks about her son’s struggles in a school that didn’t offer ESL classes.

Sareos Gedi is a refugee from Somalia. She came to the United States with her husband and two children, leaving behind three children and her mother in Africa. She came to the states with no knowledge of English. After just a few weeks, she had to go to the hospital and deal with medical problems, all while not being sure what was going on because of her limited English. But through hard work and dedication she learned the language and is now a US citizen.

However, there are many organizations willing to help refugees. Ishkashitaa Refugee Network and the Arizona Language and Transportation Services are two organization that ESL teacher Grace Green works with. These organizations not only offer ESL classes and translator services, but Ishkashitaa helps provide refugees with jobs through their fruit gleaning program and ALTS transports refugees to important appointments.

At the University of Arizona, Professor Cindi Gilliland created the Arizona Resource Connection. This club gives students the opportunity to put their business skills to use while helping refugees find jobs and raising money to fund projects both in Tucson and outside the country.

After years in the construction business, Mark Fontana finally decided to pursue his life long goal of opening a restaurant in Tucson, Arizona.

A look at the University of Arizona’s Band Day, an annual high school marching band competition.

Its residents however, don’t feel like crime is any more predominant in their area than anywhere else in Tucson.

Chris Brooks, the president of the Peter Howell Neighborhood Association, says that the belief of there being a lot of property crime in the area is just a misconception.

Commercial areas surround Peter Howell along the edges. According to Brooks, that is where most criminal activity takes place. “When you get inside the neighborhood, it isn’t so bad,” said Brooks.

Peter Howell became a neighborhood in 1951. Evo DeCancini, attorney general of Arizona and a Justice of the Arizona Supreme Court, decided to develop suburbs on land he owned in Tucson to accommodate a boom in the population.

“What really boomed Tucson was World War II,” said Jim Turner, historian and former resident of Peter Howell. The bases and factories brought many people to Tucson. After the war, returning GIs and the baby boom continued to contribute to a huge housing shortage.

Turner moved into the neighborhood in 1951 when he was two years old. In the 50s, the community was full of young people and their families. “With the baby boom they couldn’t build grade schools fast enough. Almost every house had kids my age,” he said. “Halloween was just nuts. It was like hundreds of kids came by your house at Halloween.”

Turner, who also spent some time working as a journalist, recalled an interview with his grade school principal Al McQuary six years ago. McQuary used to warn his teachers about being impressed by their students’ high test scores. “He told them that ‘it’s not the quality of your teaching. These kids all come from upper middle class professional families. Their parents are lawyers, judges, engineers, dentists.’ ”

Peter Howell does remain predominately white, with 80 percent of residents being Caucasian, about 3 percent higher than the rest of Tucson.

However, it isn’t as young as Turner remembers. According to data from the 2010 U.S. Census, only a fifth of homes in the neighborhood have children. In comparison, nearly a quarter of homes in Tucson have children.

Though Turner no longer lives in the neighborhood, he hasn’t moved far from his childhood home. The small Scotts pine tree his grandfather planted in the 50s now towers at nearly 60 feet, marking his old home. When asked about his thoughts on the neighborhood today he said, “Rundown.”

It no longer has the same pristine up keeping that he remembers from his youth. Where there was desert landscaping in medians, now there are weeds. Where the streets were smooth, now they’re cracked.

Josephine Thoman has lived in the neighborhood her whole life. She, too, has watched it change and grow through the years.

Thoman has many fond memories of living in the neighborhood. She remembers the old YMCA, when there was only one drugstore in the area, and “when El Con was really a mall.”

She gestures down the street. “The way the streets were built, when it rained there would be so much water.” The children took advantage of that and floated down the makeshift river in whatever they could find. “Some kids went all the way to the river but I never did that. I stopped at 5th Street because I had to walk home.”

She points to a house across the street. “The woman that lived there, when we were trick-or-treating made us sing a song for candy.”

“Everyone knew everyone,” she said. “It was a lot of fun growing up.”

Beneath the idyllic sounding conditions, Peter Howell does have a history with crime. Elizabeth Quinn, the neighbor Thoman remembers, was murdered in her home. Quinn was found beaten to death in her home on East Kilmer Street in 2007. The case was never solved.

The Pied Piper of Tucson, a famous serial killer, also left his mark on the neighborhood.

“Charles Schmid was known as the Pied Piper of Tucson because he had so many followers. And he and his followers were wild. He decided he’d like to know what it was like to kill somebody,” Turner said.

According to Turner, in 1964 Schmid tricked Alleen Rowe into going into the desert under the ruse of going to a party. Instead, he murdered her.

Schmid’s girlfriend Gretchen Fritz witnessed the crime. During a messy breakup between the two, Fritz threatened to expose Schmid. He then took Gretchen and her sister Wendy to the desert and murdered them.

Though his victims lived just outside of the Peter Howell neighborhood, many of the residents still knew Gretchen and Wendy Fritz. “My girlfriend at the time was a good friend of Gretchen’s,” Turner said.

Schmid was eventually sent to prison for the murders. Despite successfully escaping once, he was caught and upon his return to prison was stabbed to death.

Despite past instances of violence, residents today are happy with the state of their neighborhood.

Rick Woodruff, 52, has lived in the area for 11 years. He was attracted by the central location but over the years, he’s appreciated the quiet neighborhood and amiable neighbors.

“It’s a good neighborhood to walk in,” Woodruff said. Though Peter Howell lacks sidewalks, the streets are wide and the neighbors friendly. “Once the sun goes down people come out to walk their dogs.”

As the sun sets, some residents emerge from their houses with their dogs leashed. The sun no longer beats down and the light breeze makes the Tucson heat bearable. Most smile and wave as they walk by.

“There is something that makes Peter Howell unique but I can’t quite put my finger on it.” Woodruff said. When asked what he would change about the neighborhood he simply replied, “Nothing.”